In grade 6 students have been learning about mixtures and the different component properties they have. They have experimented with different separation methods for heterogeneous and homogeneous mixtures. Students explored a solution of diatomaceous earth and water and found that the particles had a greater density than water and settled to the bottom of the cup. The investigation of a salt water solution resulted in allowing time for the water to evaporate in order to separate the mixture.

In grade 7 students have been learning about how elements come together to form compounds. The students were given the challenge of building a number of compounds with marshmallows and testing their peers in a game of matching. This activity helps with understanding how to read chemical formulas like C2H6O.

Students have been experimenting with how chemical bonds can form crystalline structures. As a class, students super-saturated a solution with a boron compound and suspended a material within the solution. As the solution cooled it formed a beautiful crystal structure around our material.

In I.T. students had an introduction to coding. They had to find the shortest possible code to move their fruit from one corner of the paper to the other. It was a fun challenge to see which path was the shortest and why. Students discovered that in this example the most optimal route included the least amount of turns.

Students in Miss Anne’s junior kindergarten class participated in a science experiment where they had to discover which shapes roll and which shapes do not roll. Students used a ramp to discover the properties of shapes.

The students in Mrs. Powell’s class worked in teams of three on a classroom design project. Each team compiled a report including a design proposal for the set up of the classroom with the desks, furniture, carpets and bookshelves. The students measured the area and perimeter of the classroom. Each day the recorder kept notes as the team went through the process of  putting the report together. During the process, the word builder helped the group learn new vocabulary by looking up definitions in the dictionary and finding synonyms for their new words. As well, each group had to present an advertisement to “sell” their idea to the other students. At the end, each group printed their report and shared their advertisement. One group used the Bookmaker app to create a book on an iPad using screen shots of their report papers. After the presentations, the students took a gallery walk to get a closer look at all of the parts of the reports that were shared. A vote was cast and one design was selected by all. The classroom was transformed and the students had a small celebration and had some time to enjoy the new set up.

Throughout a unit on buildings and structures the Donatello class read the story, “The Three Little Pigs: an Architectural Tale.” In the story the first little pig builds a house of scraps, the second pig builds a house of glass and the third builds a house of bricks. Students were asked to build three houses using scraps, “glass,” and “bricks.” Students then tested out their houses to see if they could withstand “The Big Bad Wolf.”

In brain booster club this week students completed a marshmallow challenge. The students had to build a freestanding structure with spaghetti, tape and string to hold one marshmallow at the top. The tallest structure successfully created was 36cm!

In Junior Kindergarten students have been learning about different types of structures. Children have enjoyed completing many different building challenges using various materials.

This week Young Engineers Club began. Students involved in this club recreating famous architecture from around the world using toothpicks and marshmallows.  The Eiffel Tower was their initial inspiration. The children created different structures and explored how to make them stable enough to stand up on their own.  They had a lot of fun!

In grade three, students are studying Aboriginal cultures, specifically the Stó:lō Nation of Coastal BC.  Through an interactive website, groups were able to collaborate and build a presentation on specific aspects of this group’s lives.  According to what student’s are interested in, topics included daily life, tools, hunting and gathering, and food preparation.

On Monday, January 16th, we had a very special guest visit our school. Her name is Anne Glover and she is a string storyteller. She used string to help tell us several stories. Anne is bilingual so she spoke to us in both English and French. Many students had the opportunity to come to the front to try out string storytelling for themselves! Fantastique! Anne generously gave us some strings to share and we will be having a draw to see who gets them.

Students in Miss Simpson’s grade one class, students are learning about patterns in the sky. Students examined the difference between night and day and were able to identify that it is light during the day and dark at night. They learned that the reason we have night and day is due to the orbit of the earth around the sun. Students created models of the sun and earth as a visual aid to help them understand this concept. They also created beautiful mosaics of the moon (shown below). 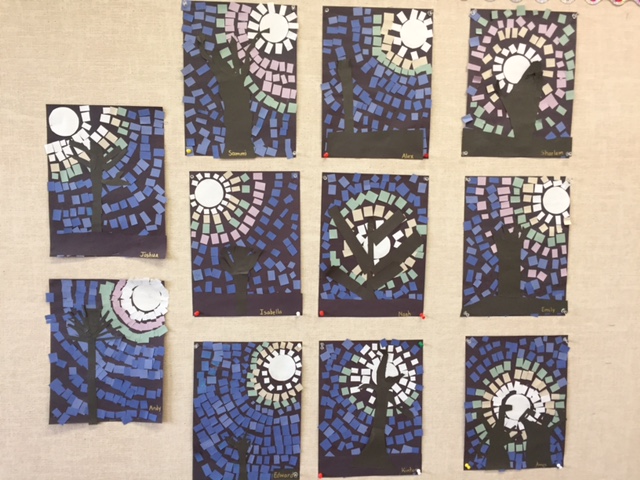